About the Ottawa Harmony Singers

We are a medium-sized choir, where every voice counts. We take pride in our singing, but most of all we have fun doing it. Our director, Pat Brush, is a fabulous voice teacher and under her direction, each of us has gained confidence and improved our singing.

We have a very talented pianist, Noah Landers, who accompanies us at all our rehearsals and performances. And there are a few songs that we sing a capella.

We sing most of our songs in four part harmony (soprano, alto, tenor and bass) but don’t let that scare you away. Pat’s arrangements are such that each part is like a melody that can be practiced by itself. Not all of us can read music, but the music files on this website help us rehearse our parts at home.

Although some of our songs are serious, others are quite silly and give us an opportunity to have fun in a way that brings joy to the people who come to listen to us. If you join us, there’s a good chance that you’ll become more comfortable performing in front of an audience.

Our weekly rehearsals take place in St Giles Church. Give us a try!  If you decide to stay with the choir, there is a $75 membership fee per semester, to cover rental and salaries. 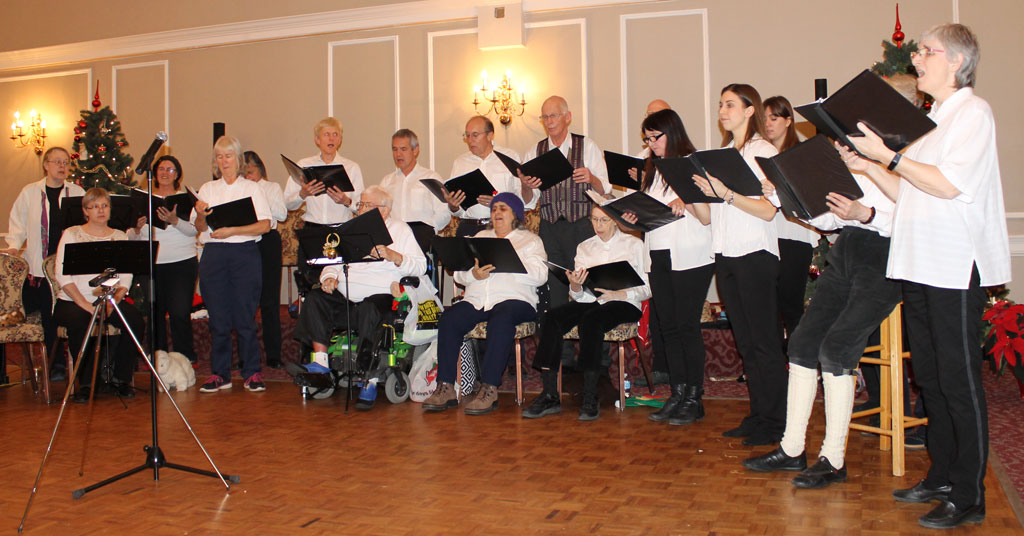 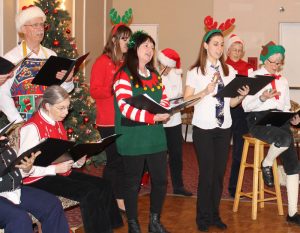 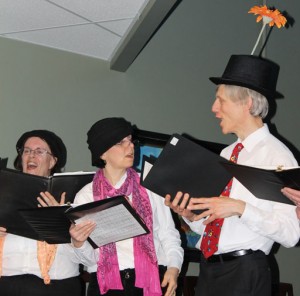 Where Did You Get That Hat?

The Harmony Singers have more than 60 years of history!

November 1953. After weeks of talking about starting a choir the following notice appeared in the church bulletin: “On Thursday evening at 8 p.m. November 17, 1953 at the home of Mr. & Mrs. De Kleer, 394 Nepean Street an attempt will be made to organize a choir. Everyone is welcome to join”. That Thursday an organizing committee of 12 Dutch Canadians (who were also the first singers) established a Dutch ethnic choir. The founding committee consisted of members of the (then Dutch) Christian Reformed Church who chose a religious name for the group: “Praise the Lord”. The first practices were held in the kitchens of the De Kleer and Nyhuis families (back then dues were 15 cent per week!), and after 1954 in various churches. In the beginning the choir sang mainly at church services. The first performance took place on December 26, 1953 during a Sunday school Christmas concert. They made their 2nd appearance on February 6 , 1954 at a congregational meeting. They kept their rehearsals going despite the bad winter weather, encouraged by the organist, who said, that, if he could slide into the ditch 3 times in one week and still show up for choir practice, there was no excuse for the rest of the choir members not to show up.

By 1956 the choir was beginning to perform more at community events and it was in that year that the name “The Ottawa Dutch Choral Society” was adopted. Since that time the choir has been non-denominational and now has 20 members, from many ethnic backgrounds. In 1994 the name was changed to the “Dutch Choral Society” to reflect the fact that members are from many communities in the region.

In 1967 we become the proud owners of formal dresses & suits and sang at Expo ’67. In 1968 the choir got Dutch (Volendam) costumes complete with wooden shoes. 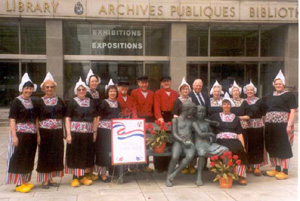 In 1970 the choir sang at the National Arts Centre to celebrate the 25th anniversary of the liberation of Holland and the installation of the organ funded by Dutch immigrants from across Canada and built in the Netherlands.

The choir has sung on numerous occasions for members of the Dutch royal family: in 1988 for Queen Beatrix and again in 2002 at a reception for Princes Margriet at Dow’s Lake during the Tulip Festival.

For the choir’s 50th Anniversary in 2003, the Dutch Embassy donated new scarfs in the Dutch orange (representing the Royal House of Orange) trimmed with red, white & blue (colours of the Dutch flag) to wear with our white shirts, black skirts & trousers. 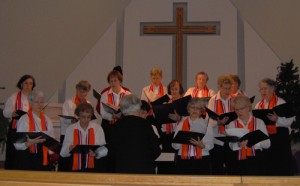 The choir sang for television and radio broadcasts. They have taken special pleasure in collaboration with other choirs, bands and instrumentalists in the region.

Over time, the choir decided to focus on ministering to the elderly by performing in retirement residences and nursing homes.

In 2008, the choir changed its name to Harmony Singers and decided to pursue an even more international repertoire.

In 2010, the decision was made to sing repertoire from 1880 through 1959: Broadway tunes, radio hits, music hall songs, and the American songbook. We have found that this music touches the residents and they sing along with many of the songs. Many of them recall their parents or grandparents singing these songs to them.

In 2014, we moved our weekly rehearsals to St Giles Church in the Glebe, where you can find us now.

Since then, we haven’t stopped growing. We now have over 30 members, but the camaraderie and the mutual support among our singers have remained the same.